A Day in the Life of a Child With Fibromyalgia 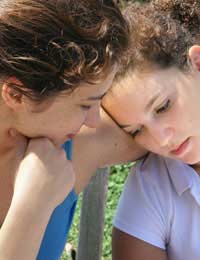 Gina is 13, and she was diagnosed with fibromyalgia syndrome when she was 12 years old.

It’s half past eight in the morning and I’m going to school. It’s okay most of the time, but I guess everyone thinks that. I have to miss school sometimes because I’m too sore, which means I have to do a lot of catching up, but my friends do help me out with notes and things, and my teachers send work home, so don’t think I’m getting out of it! Some kids (and even a couple of the teachers, in the beginning) are a bit funny with me – they don’t think that I’ve got anything wrong, because I don’t look ill or ‘different’, and I don’t have a stick or use a wheelchair – but my friends understand and stick up for me.

My aunt has fibromyalgia and she helps me to cope, and my mum and dad really look after me well. I know they get upset because I’ve got this ‘thing’, but they try to encourage me to be as ‘normal’ as possible.

It’s lunchtime, and everyone else is haring around and shouting, but I’m sitting on the grass with some friends. Fortunately, they don’t mind just sitting down as well – sometimes I think they like the excuse of keeping me company, especially as I’m allowed to stay inside when it’s too cold!

It’s two in the afternoon and it’s time for PE. I can’t do most of the PE exercises, and I do get picked on because of that It made it harder to make friends at first because everyone is together in the changing rooms and I’m stuck in the library – luckily I love reading!

I love swimming, though, and that’s easier on my joints. If I’m having a good day, I’m nearly the best swimmer in the class, because I go three times a week after school with my dad. We have started doing yoga as well, and I can do that with everyone else.

It’s seven in the evening, I’ve finished my homework and I’m playing my tenor recorder. It’s a good day so I should be able to get a good session of practice in before I go to bed. I’ve done my Grade 4, and I’m working for my Grade 5 exam, but sometimes I’m just too tired and too sore to play. I started off playing the flute, but I found that my arms got too painful to hold it up. After a while, my flute teacher said that there was something wrong and so mum took me to the doctor. That was when I was diagnosed with fibromyalgia syndrome. My flute teacher was very nice and talked to my doctor, and they suggested that I should try the recorder, because it would be easier to hold and would hurt my arms less. I would have loved to play professionally, but unless the symptoms of fibromyalgia syndrome go away as I get older (and I know they do in some people) I don’t think I will be able to. At least when I’m playing I don’t think about the pain.