Home > Living With It > Fibromyalgia in Old Age 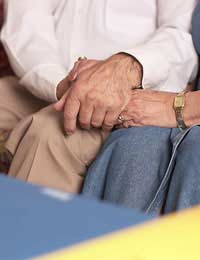 Studies in Norway and Sweden have shown that people who had back pain or other chronic forms of pain were more likely to develop widespread pain (including fibromyalgia) in later life.

Symptoms of Fibromyalgia in Older People

People who develop fibromyalgia syndrome over the age of 60 generally get the same types of symptoms (fatigue, muscle stiffness, headaches, insomnia, poor short-term memory and inability to concentrate) as younger people. However, according to a small study, older people are more likely to report functional headaches (headaches not caused by a specific disease – includes tension-type headaches), and tension and anxiety, and are more likely to say that activity makes their symptoms worse.

Osteoporosis is a bone disorder where the bones become brittle and lose their strength. People become vulnerable to bone fractures and lose height as the vertebrae (bones of the spine) become compacted, and may develop back and neck pain. Osteoporosis is most common in women past the menopause.

Osteoporosis may be more common than usual in people with fibromyalgia syndrome as they age, especially after the age of 50.

The diagnosis of fibromyalgia syndrome is harder in older people because the symptoms may be confused with symptoms of other disorders, such as multiple sclerosis, rheumatoid arthritis or osteoarthritis.

Using drugs to treat fibromyalgia syndrome or any other form of disorder in older people is also more complicated because older people are likely to take medications for a number of other disorders, and so run the risk of interactions between the medications causing additional side effects.

Exercise is an important part of the treatment in fibromyalgia, and it also helps keep weight down, which reduces the stresses on the joints. Older people may find it hard to take part in exercise because they cannot get to classes, or they have other problems that reduce their movement, like osteoarthritis. If older people can get to a pool, swimming is a good form of exercise, because it is aerobic without having a high impact on the joints. For people who cannot travel, exercise DVDs with gentle exercise yoga and Pilates programmes can be a good alternative – there are some designed for older people or people with reduced mobility.