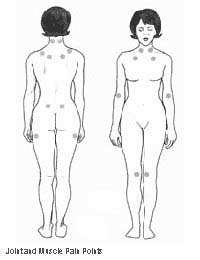 Fibromyalgia syndrome and lupus share some similar symptoms, and the two disorders may be mistaken for each other in diagnosis. However, they have very different causes and treatments.

Like fibromyalgia syndrome, lupus is much more common in women than in men.

Fibromyalgia syndrome does not cause widespread inflammation, which is seen in lupus.

The problem with misdiagnosis is that, while the symptoms of the two disorders may be similar, the causes are quite different, and the treatments are also different. Treatments for one disorder may not help the other, and in fact may make some of the symptoms worse.

Around 10-30% of people with lupus develop fibromyalgia syndrome, though some studies suggest that this figure may be rather high. A study in the USA published in 1994 suggested that patients with both lupus and fibromyalgia syndrome were more likely to have pain, including muscle pain, sleep problems, bloating, period pain and light and noise sensitivity than people with lupus alone. Patients with both disorders were more likely to have problems with daily activities and were less likely to have a job.

Lupus is incurable but treatable, and its treatment depends on the symptoms. The inflammatory symptoms and pain can be treated with over-the-counter anti-inflammatory drugs such as ibuprofen. If these are not sufficient, doctors can prescribe stronger painkillers.

The symptoms of arthritis (and the underlying worsening of the joint damage) may be treated using disease-modifying anti-rheumatic drugs (DMARDs), including antimalarial drugs and immunosuppressants.

Corticosteroids and immunosuppressants can be used to prevent or reduce flares, and corticosteroids can also treat the symptoms of lupus flares.