Home > Other Symptoms > Depression as a Symptom of Fibromyalgia

Depression as a Symptom of Fibromyalgia 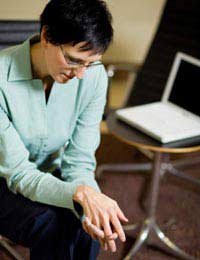 Many of us suffer from depression for a variety of different reasons and although whilst suffering from this depression seems as though it will last permanently, it does eventually lift even if medicated for a short period.

People suffering from illnesses however experience depression in a variety of different ways and this is what we aim to look at here.

Depression can be described by many different people in a variety of different ways but for the most part it has several things in common which are:

There are just a few of the symptoms that can be associated with depression and as we have already touched upon each individual that suffers from a bout of depression can do so and exhibit a different set of symptoms.

Depression and illness are two things that many individuals will tell you go hand in hand. It is almost a cyclical concept in the same way that stress would manifest itself. Indeed depression is a kind of stress only more deeply rooted therefore making it harder to alleviate and harder for the person suffering from it to cope with.

Generally if an individual is ill then they will feel some sort of stress or depression as they try to cope with the illness but as the illness lasts longer and becomes chronic then the sufferer may find that they cannot as easily carry on with everyday life.

This is one of the problems of Fibromyalgia.

Sufferers of Fibromyalgia, especially those suffering from the condition in its most severe and chronic form, will more often than not find themselves at the whim of depression. Depression can take a hold if fatigue continues and the sufferer is not able to sleep, thus relieving the symptoms of fatigue and tiredness.

It is important to understand the nature of depression especially in relation to such illnesses as Fibromyalgia. It is also important to remember that although the sufferer needs to know that they are cared for, constant asking if they are well can lead to them feeling depressed.

A common problem for sufferers of such illnesses is the knowledge that their condition is not treatable to a point where it can be cured. With a condition such as Fibromyalgia which has no known cure – certainly not at the time of writing – then the sufferer can feel the pangs of depression creep in if they are surrounded by individual able to do whatever they like without the concerns of fatigue, pain or any of the other symptoms associated with the illness.

Indeed as we have already mentioned some sufferers find that depression falls on them if they are asked too often as to their well being. Such questions only seek to reiterate the fact that the sufferer is not well and that being well is something that may happen tomorrow or may not.

As a family member living with someone suffering from any condition that can bring about depression it is important to look out for the signs as we have indicated above. If you see these signs or indeed the sufferer themselves recognises the signs then it is best to make an appointment for them with their doctor as soon as possible.

Your doctor may prescribe a short course of anti-depressants but this is normally only a short term solution to the problem and the sufferer will have to look at their lifestyle with a view to making some changes that may help alleviate the problem.

Stressful factors should be examined and indeed your doctor will ask if there any circumstances that have unfolded in your home life that may add to such bouts of depression. It is important however that when discussing such problems with your doctor that you are frank and honest so that he or she may make the correct diagnosis.