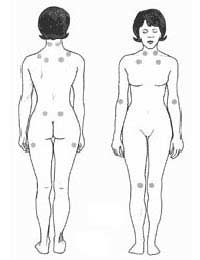 What is Joint Hypermobility?

In some people, hypermobile joints have no symptoms other than increasing their bodies' flexibility, and it can be used to an advantage, for example in dance or sport, or in playing an instrument. However, in people with joint hypermobility syndrome, the hypermobility of the joints can lead to pain and other symptoms after excessive or repetitive movement.

Other Symptoms of Joint Hypermobility Syndrome

Another symptom is known as ‘proprioceptive impairment’, where patients don’t ‘know’ where they are physically in space, which can make them less stable and prone to falls, and awkward or clumsy.

Some people with joint hypermobility syndrome (possibly up to half) are more sensitive to pain than the rest of the population, and have pain at a number of sites across their bodies. Other symptoms can include low blood pressure when standing up, light-headedness and fainting, tachycardia (fast heart rate), anxiety, panic attacks, tiredness and heat intolerance.

How to Look After Hypermobile Joints

There is no treatment for joint hypermobility syndrome, but exercise can strengthen the muscles around the joints and the joints themselves, making them more stable. It’s also important to look after any injuries properly, to prevent the development of chronic pain.
Next Page

Coping with Muscle Pain
Share Your Story, Join the Discussion or Seek Advice..
[Add a Comment]
Was diagnosed with fibromyalgia 2 years ago and was told it was secondary to joint hyper mobility syndrome which I never knew I had,I’m 40 now and it explains so much of my life , I’m not lazy or a hypochondriac I’m in pain and suffering on a daily basis
Sacha - 17-Mar-18 @ 10:54 AM
Wow. Always known I was hypermobile, but I am also very clumsy and prone to accidents
Frances - 3-Mar-18 @ 8:17 AM
I am.horrified to find this link. I've just been told am hypermobile, just thought l was flexible Now the widespread pain anxiety and skin thinness is explained. How do people manage this? It's scary.
Joe - 26-Feb-18 @ 12:12 PM
I've been diagnosed with Hypermobility but I'm beginning to think it could be Fibromylgia as i expiernce a lot of pain all over my body & sore to touch!!!
Haze - 5-Aug-17 @ 7:50 PM
Title:
(never shown)
Firstname:
(never shown)
Surname:
(never shown)
Email:
(never shown)
Nickname:
(shown)
Comment:
Validate: