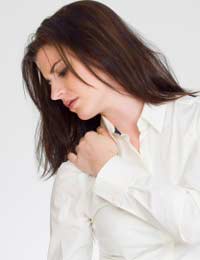 Many sufferers of Fibromyalgia find that they have to endure a considerable amount of muscle pain; sometimes for short bouts or lengthy periods of time depending on the nature of the so-called 'flare-ups' which are common with the illness.

A flare-up can occur at any time without any warning to the sufferer. However long term sufferers of the illness are usually well versed in the signs of a flare-up and can take appropriate measures to try and combat them.

The muscle pain associated with Fibromyalgia can manifest itself as a general feeling of fatigue where the arms, legs, back and other extremities feel heavy. As these flare-ups continue so too does this feeling of fatigue and it can continue to the point the sufferer feels unable to move properly. This can not only cause problems from an employment perspective but causes problems with the general everyday tasks such as washing themselves, housework, and even walking.

Severe muscle pain also occurs which can manifest itself as a burning sensation and a feeling of pains and needles across the skin. Many sufferers have likened this feeling to a series of burns which although not visible to the skin can be painful to the touch.

As there is no one drug on the market specifically designed to deal with the symptoms of Fibromyalgia it is left very much to the sufferer's doctor to determine the best course of pain relief to prescribe.

From a personal perspective however the sufferer should try - where possible - to limit the number of physical endeavours they undertake.

As mentioned previously the condition of Fibromyalgia is such that it may not be present in the sufferer one day but the next day may consume them, leaving them almost debilitated and in great pain. So in order to cope with the problems of muscle pain one should first determine what amount of physical activity one can cope with.

In some instances your doctor may prescribe short-term courses of anti-depressants or medication that may limit the amount of serotonin that your body produces although it must be noted that these instances demanded that the pain caused by the condition is severe.

Light Exercise - Often and a little

One of the most commonly prescribed remedies for Fibromyalgia is light exercise such as walking short distances or perhaps some arm and leg exercises which can be carried out sitting down. However before embarking on any such exercise regime it is imperative that you consult with your doctor and seek his or her opinion before doing so.

As we have mentioned some Fibromyalgia sufferers experience bouts of pain which then ease and leave them pain free for a few hours or a few days, in some cases even weeks, but for those individuals who suffer severe pain the effects can be quite debilitating and can also bring about depression and emotional fatigue.

As Fibromyalgia is a condition that cannot be visualised it is sometimes difficult for those who do not suffer from the problem to understand it's limitations and it's effects.